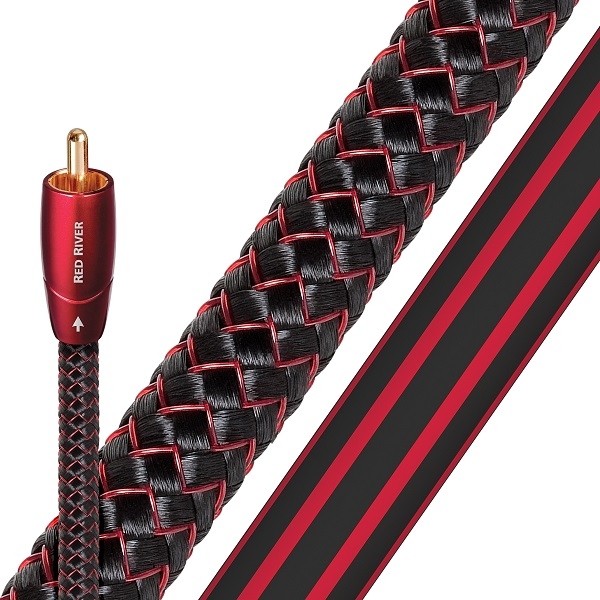 Part of the AudioQuest Bridges & Falls Series, which place the left and right channels in a single jacket.

Since the beginning, AudioQuest has pioneered the use of superior metals, yet even we were surprised by the huge leap in performance attained through the astonishingly smooth and pure surface of Perfect-Surface Copper (PSC). PSC clearly outperforms previous AQ metals that cost over ten times as much. Proprietary metal-processing technology protects the wire’s surface at every stage of drawing and fabrication. When high-purity low-oxide copper is kept as soft, pure, and smooth as possible, it becomes a wonderfully low-distortion conductor. In a conventional cable, electrical and magnetic interaction between strands is one of the greatest sources of distortion, often causing a somewhat harsh, dirty sound. Solid conductors are fundamental toward achieving Red River’s very clean, natural sound.

It’s easy to accomplish 100% shield coverage. Preventing captured Radio Frequency Interference (RFI) from modulating the equipment’s ground reference requires AQ’s Noise-Dissipation System (NDS). Traditional shield systems typically absorb and then drain noise/RF energy to component ground, modulating and distorting the critical “reference” ground plane, which in turn causes a distortion of the signal. NDS “shields the shield,” absorbing and reflecting most of this noise/RF energy before it reaches the layer attached to ground.

Our Triple-Balanced Geometry uses a separate ground-reference conductor, so the cable’s shield is never used as an inferior conductor. Whether prepared with RCA or XLR plugs, the cable’s three conductors ensure that the positive and negative signals have equally superior, low-distortion conducting paths.

Shop departments
Shop brands
On Sale Now
For any queries or sales questions please click here to contact us, we have staff ready to help you
Get In Touch
© i Paul Money Hi Fi & Home Entertainment - site designpartner

Your cart is currently empty.